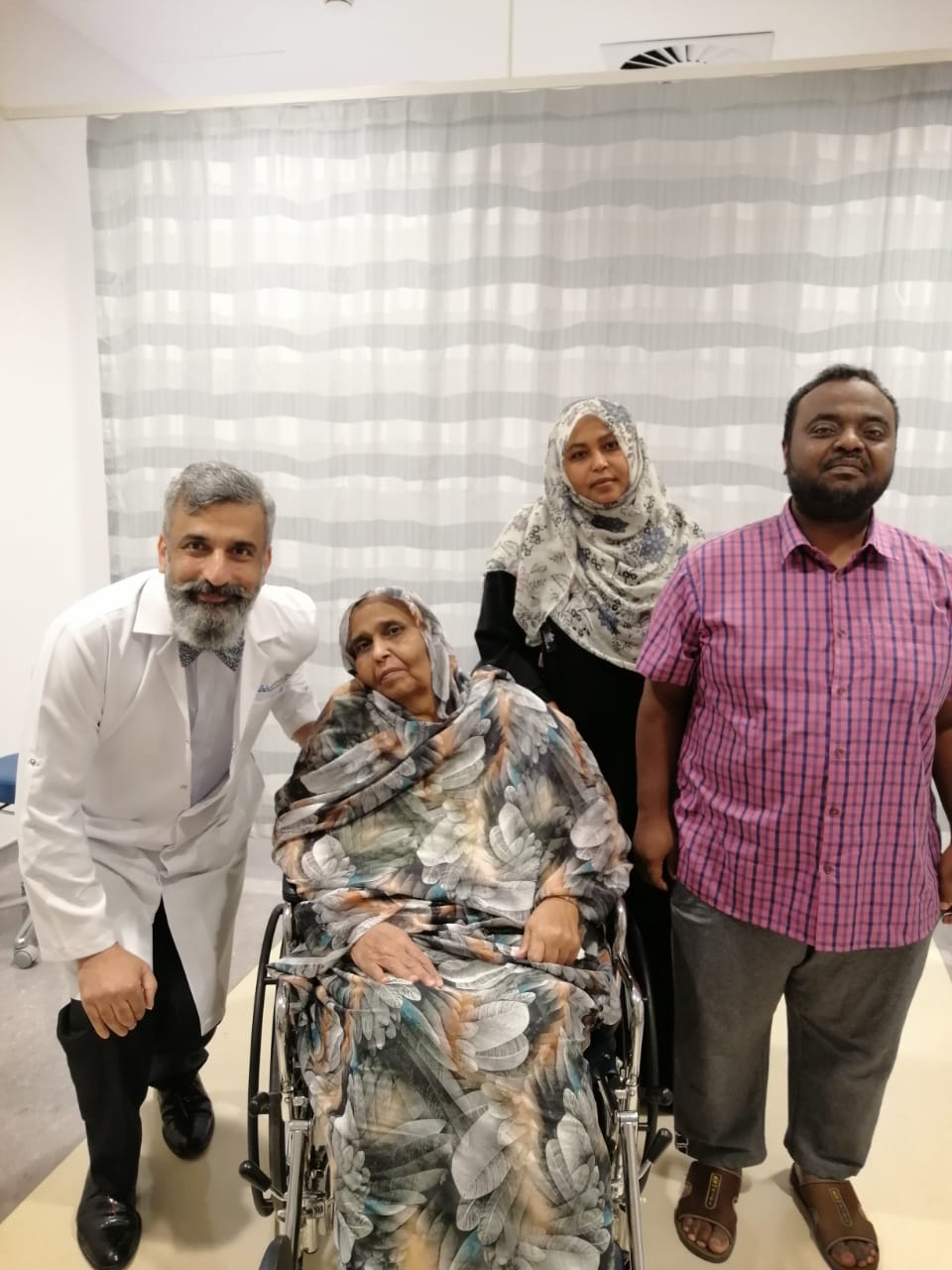 Having difficulty in doing simple everyday things such as lying flat on her back while sleeping, the condition severely affected Mrs. Najwa’s routine life. “The acid reflux would cause me severe irritation.  I had many dietary restrictions and had constant coughing that disturbed my sleep,” explained Mrs. Najwa.

Mrs. Najua’s, son Mr. Abdel Rehman Mohammed Elhaj, a resident of the Kingdom of Saudi Arabia had been seeking a permanent solution to relieve his ailing mother off the pain and discomfort for over 3 years. He searched and assessed various options in a few countries. Having read about successful surgeries performed by Adjunct Clinical Professor Amir Nisar, Consultant General Surgeon at Fakeeh University Hospital, Mr. Abdel knew his mother would find a solution at FUH and took immediate steps. Soon after a teleconsultation with Professor Amir, Mr. Abdel brought his mother to UAE to undergo an anti-reflux surgery; Laparoscopic Nissen’s Fundoplication, as he knew how severely the condition affected his mother’s life.

Mrs. Najwa underwent a Laparoscopic MiniScarLess (MSL) Nissen’s Fundoplication and was symptom-free immediately after surgery. She was pain-free after surgery, comfortable, and mobilized well.

“The surgical approach offered to Mrs. Najwa was MiniScarLess (MSL) & Laparoscopic, hence allowing her to feel the difference immediately after surgery. She also has an underlying complex history of deep vein thrombosis, which made this surgery very challenging. Since she had previously suffered from a life-threatening case of Pulmonary Embolism and had been put on blood thinners for life. However, she tolerated the surgery well and had no issues,” said Professor Amir Nisar, Consultant General Surgery at FUH.

Discharged in two days, Mrs. Najwa went home happy and relieved her reflux symptoms. She can now enjoy a full night’s sleep undisturbed. Her son’s joy knew no bounds since he saw his mother symptom free and relieved after years.

Acid reflux is a very common condition. Everybody experiences reflux at some point in life, which is why it is paramount to understand that persistent reflux should be taken seriously. Reflux as a condition can be managed and treated according to the severity of the condition. About 30% of the general population can have reflux occasionally; 15-20% of people experience severe reflux; many of these people are born with weak muscle valves between the esophagus and the stomach. In some cases, people are born with the condition and in other cases, people develop the condition. There are a few risk factors that cause people to develop the condition, they include obesity, pregnancy, poor eating habits, smoking, drinking coffee and poor lifestyle etc. Following a healthy lifestyle is always advisable to prevent GERD, that could progress to Barrett’s esophagus or even cause cancer of the esophagus, if untreated.

The investigations and best surgical treatment of acid reflux is offered exclusively at the Surgical Institute at FUH. Laparoscopic MiniScarLess (MSL) Antireflux surgery (Nissen’s Fundoplication) is exclusively offered at Fakeeh University Hospital. This is a minimally invasive surgery performed laparoscopically, involving 4 very small incisions made in the abdomen to carry out the operation. The surgery takes about an hour and can be done as a day case as well. Recovery is quick and in most cases pain-free or with only minimal discomfort. Professor Amir has worked in the United Kingdom in tertiary referral centers for over 27 years and has taught and trained many surgeons, these complex surgeries in Europe and Asia. He has performed over 3000 successful Nissen’s Fundoplication surgeries, including complex re-do operations. Laparoscopic MiniScarLess Nissen’s Fundoplication offers better results than any other operation in terms of cure of reflux in the long term with a very low rate of recurrence of symptoms.